Bear Paws and Trees by Judee. 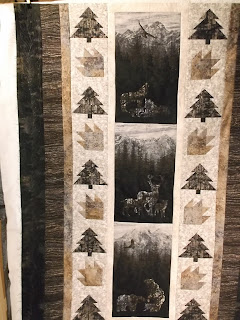 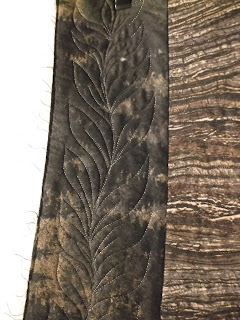 Practically impossible to see the quilting on the front of this quilt since I used Monopoly thread.  I didn't want the thread to be the focus of the quilt, so this thread barely shows up.   The problem is that you can't see the pretty quilting!  Vines in the outer border and in the wood grain first border I outlined some of the "grain".  You'll see it below. 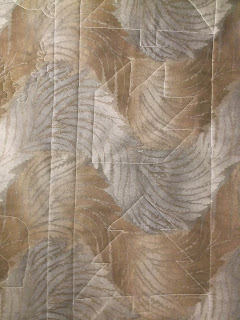 Stitching in the ditch around the piecing, in the woodgrain, 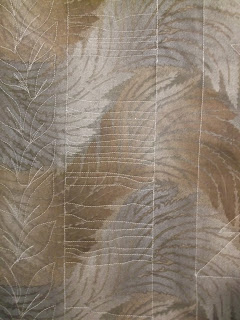 and outlining the animals to give them a little texture. 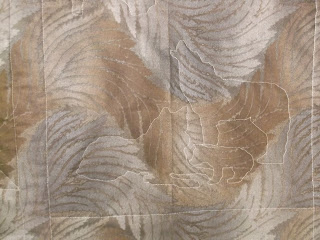 This quilt will go to a silent auction for the CCA that Judee's husband and son are a part of.  Great job Judee!
Posted by Beth on 2/16/2016 No comments: 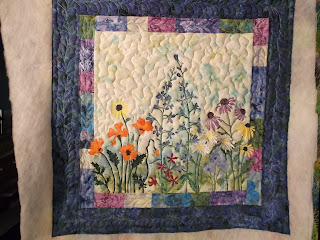 I love McKenna Ryan's work.  So detailed.  Michelle brought me this quilt that she had purchased with laser cut fabrics.  Great choice because then she didn't have to trace and cut all those little tiny flower petals out herself!
I wanted to add to the beautiful quilt, so only quilted some details on the petals and leaves, then an easy background fill. 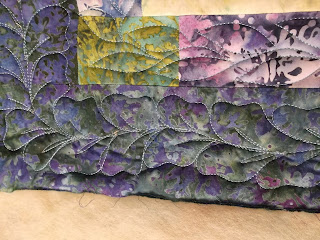 In the borders, there are "molar" feathers and leaves to tie in with the floral theme. 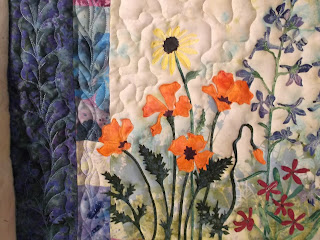 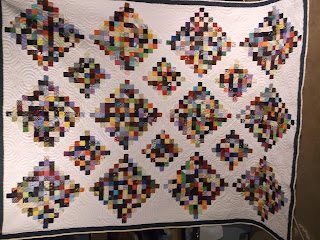 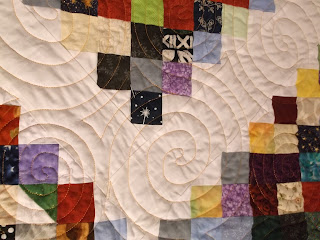 This quilt has a story behind it.
It's one of those where I found the pattern in a magazine, and then started to save scraps for it to make as a beginner ender quilt.  One where you start and end each seam of your "real" quilt with a scrap so that you don't have long thread tails, and when you've been playing for a while, you've got a bunch of scrappy blocks made!
So I've been working on these blocks for a long time, finally got them put together into a quilt top for charity, but it's turn for quilting didn't come up for a time.

On Jan. 31, 2016 my friend Judith posted on Facebook that that day would have been the 54th birthday of her younger son Tom.  That was the day I loaded this quilt onto the machine, and started to quilt it, in Tom's honor.  Tom was a police officer with the City of Portland who was killed in the line of duty.

A few weeks earlier I had accosted an officer while out biking and asked if officers in general would like to have the quilts that I make to carry in their cars to give to people who need them in a crisis.  So, that's where my police quilts will go now, directly to the officers.

I made up a note to pin to the quilt, explaining the significance behind the quilt.  I had planned to give it to the staff in the precinct, but the building was closed for the holiday.  I ended up leaving the quilt with the note up on top of a police car outside of the precinct.  I figure that between Tom and Dad, they got it into the right hands.

So, new monthly policy. First quilt of each month goes to the police, and extras for what would have been Tom's and Dad's birthdays.  Also July 21st, the day they both died, although in different years.

Like Tom, this quilt is quite bright. Although Tom wasn't a bright dresser, he was quite intelligent, so that's the connection there.  Our friend Grace suggested that Tom needed "Garanimals" clothing for adults.  The ones where the little kids only need to match the animal in the label to know that their clothes matched.  Tom had no fashion sense, and joked that one of the best reasons for being a police officer is that his clothes always matched, and he got to carry a weapon!

The backing of this quilt is grey, like the "Police" outfit I made him for his SCA gatherings.  I think that he would have appreciated that. 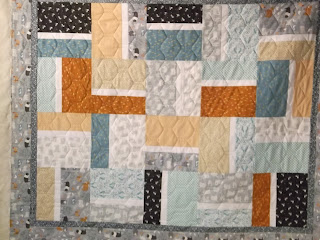 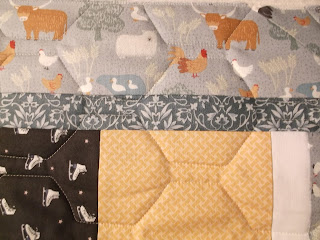 All these people having babies means that there are more baby quilts tat need to be quilted.
Here's a fun one from Pat to go to friends of hers.  Yes it's quilted with a chicken wire pantograph.  Perfect with the farm animals. 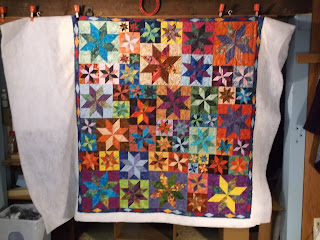 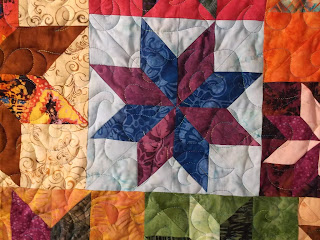 I do love scrappy quilts, and here's a stunner.
Oh to have Sara's precision piecing abilities and the willingness to frog it out if it's not right.    Look at how beautifully all those points line up, with none of them cut off. 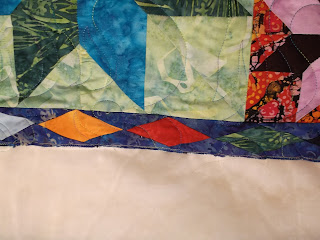 Love these little diamonds pieced for the outer border. 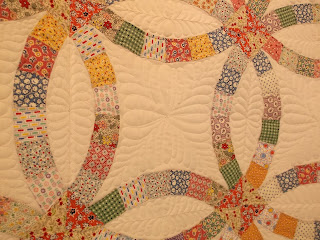 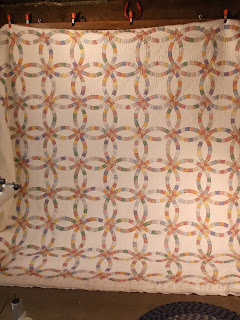 I am truly honored.  Pat contacted me via email after seeing my website, and asked me to quilt this drop dead gorgeous quilt for her.  She lives in WA state, and we've never met, only communicated via email.  While I am so grateful for her to trust me with this, I'm not sure that I'm that trusting of strangers!

Pat wanted wool batting, and after several emails back and forth, she sent me a link to a feather design that she liked.  I was having such fun quilting this quilt, that I was pretty sad to see that last row of quilt come up.  Feeling a time crunch to get the next one up, but still sad to finish this. 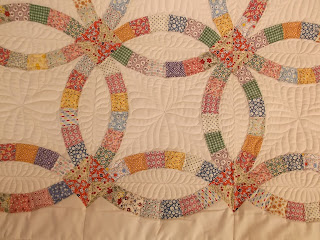 The bottom portion of this photo is not quilted because it is the bottom of the quilt, and Pat will be trimming that off and leaving the edges of the quilt scalloped.

Convergence on point by Judy 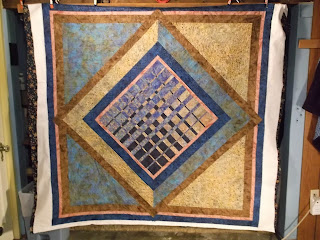 This is another of those quilts where when you are working on it you think "This is a cool quilt."  Then when you finish it, and stand back to really look at it hanging up, you say "WOW!  Cool Quilt!"

Judy told me that she had made this for her son, but is a little delayed in getting it finished an on to him.  I hope he thinks that it was worth the wait because this is a really cool quilt!
Posted by Beth on 2/07/2016 No comments: