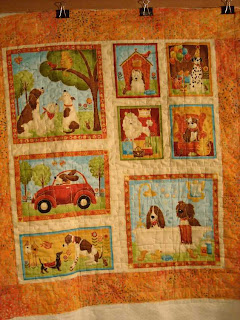 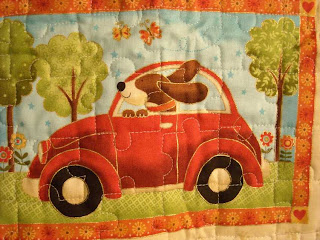 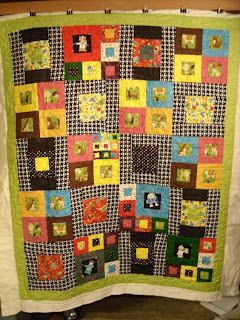 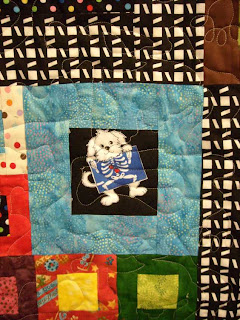 Alice brought me these really fun dog quilts to quilt. The first is a panel for a wall hanging. She chose a quilting design that resembles a jigsaw puzzle. I hope that I've learned my lesson about tracing the design with my finger to make sure I know how it works before I start to quilt it after this quilt.

The second quilt will be for the baby. The dogs are similar to the panel, but cut apart to make a much larger quilt. Also, the quilting design is different, a pantograph called "Flopsy" with dogs running, dog paws and other doggie stuff. Just a really fun quilting design.
Posted by Beth on 4/28/2010 No comments: 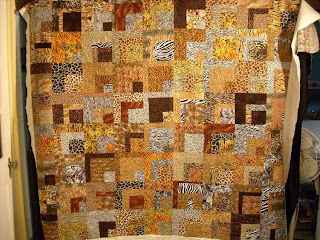 Here's a fun and funky quilt for Sara's husband. Lots of great animal prints all combined together to make a cuddly throw for him. The backing is Minkie fabric, something that's really soft and cuddly. 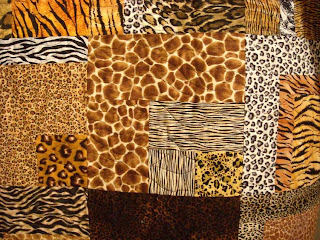 Difficult to see on all those prints, but the quilting design is flames, done in black thread.
Posted by Beth on 4/28/2010 No comments: 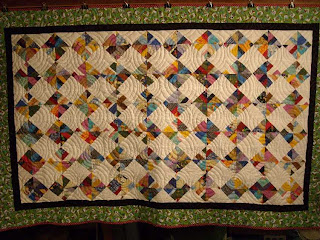 The "Wonder Cut Ruler" is one that's used for making 1/2 square triangles. I found a pattern online that used up all those narrow bits of fabric that are really too small to save, but too many to just throw away. Now I have an entire bin of them in the basement, ready to be made into more charity quilts. 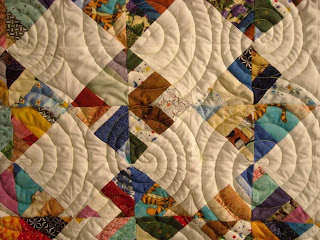 As you can see, the blocks are made up of strips of fabric that are anywhere from 1"-3" wide and then sewn together at random. They are off set with squares of white muslin, also leftovers from another project. Quilted with my wonderful "Swirls" design from my circle lord, King Tut thread, and leftover wool batting that was pieced together. The backing is made up of 3 larger pieces of green fabric that just weren't "me", but too big to give away.

With this quilt, I was able to take lots of little leftovers that I couldn't quite bear to throw away, and make something warm and cuddly for someone. This quilt will go to the Portland Police Sunshine Division.
Posted by Beth on 4/28/2010 No comments: 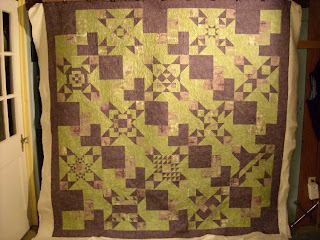 Mary's gone and done it again. I believe this is another "Patchwork Party" quilt. Love the colors, love the design. 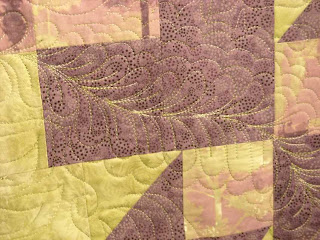 Mary chose a custom quilting design of floral fantasy in the body of the quilt, and bamboo in the border. The entire quilt is quilted with Rainbows "Lime Squeeze". 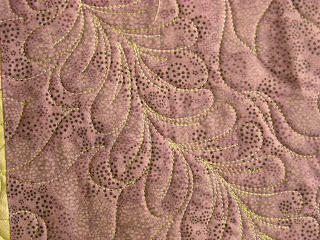 I love how the feathers with tongues turned out. It was so much fun to just play with my girl and Mary's lovely quilt.
Posted by Beth on 4/28/2010 No comments: 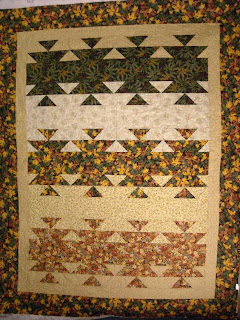 Congratulations to Diana, she is the first person to actually have this mystery quilt quilted. This is from the "International Mystery" series at Heart to Hand. Diana chose the fall color scheme, and it looks so lovely with the leaves and vines quilting design. Of course, using my personal favorite type of thread, King Tut, didn't hurt either. 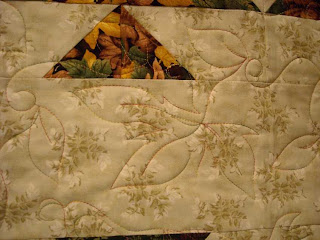 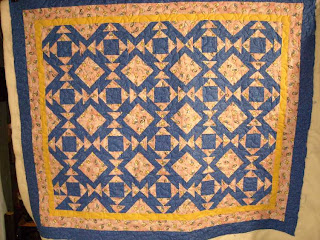 I believe that "National Pie Day" was sometime in February, but don't quote me on that. Wendy decided to hold a mystery quilt class that day, and this is Barb's version of that quilt. 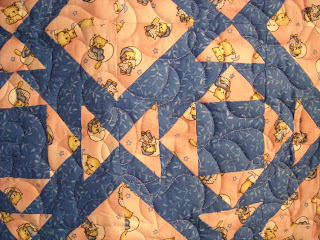 She chose a simple pantograph for the quilting design since it will be a baby quilt. No sense in putting a bunch of special quilting into something that will be drug around the floor by some lucky little girl. 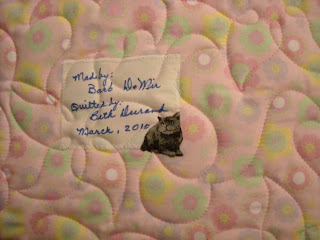 I love Barb's label! She's fussy cut a little cat design and then appliqued it to the label. So fun!
Posted by Beth on 4/28/2010 No comments: 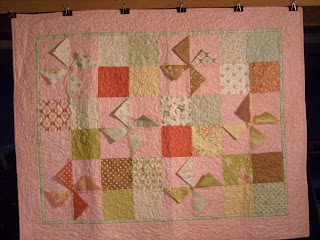 This is one of the last quilts that Wendy pieced. The pattern is called "Charming Baby", and it's from Whistle Pig Creek Quilts. The "charming" part is that you use a charm pack, or a group of fabrics that are pre-cut into 5" squares. I love the three dimensional effect that the pinwheels create. 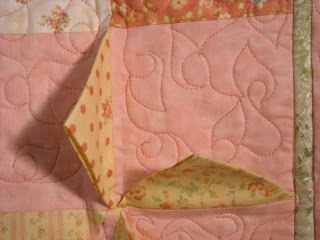 Quilt for Ray's son. "Can this quilt be saved?" 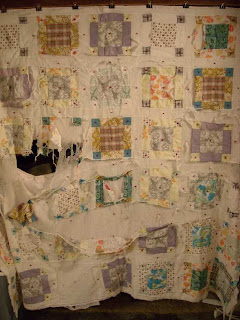 Ray is a chaplain at the hospital where I used to work, and that's how I got to know this dear man. He called me one day and told me that he had a quilt from his son, and was hoping that I could help him to get it repaired. When he pulled this out of the bag, I knew that it was a hopeless case. 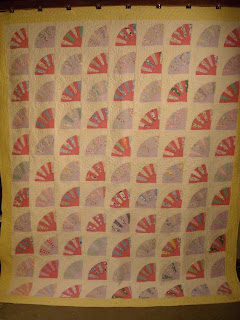 Then Ray brought out this quilt top. Here is the story that his wife, Penny, wrote about how she received the quilt top.

When I met Margaret she'd lost her speech to a stroke and she lived in the nursing home where I worked as a chaplain. Her husband visited her dutifully and daily....unless he was on a “bender” which happened from time to time. I'm sure he had a given name but I only knew him as Red. What I know of Margaret's story and the history of this quilt, Red told me...in language far more colorful than I am able to record.
In Margaret's working life she had been a junior high school English teacher which she loved. But her truest love was quilting and crafting. The quilts were often given as gifts and some were sold. Red and Margaret sold the crafts for community benefits. After Margaret retired, they involved themselves in helping the community giving money they'd made selling Margaret's handiwork.
Red met and married Margaret later in their lives....perhaps in their mid-thirties though I can't remember exactly. Margaret had been unable to get pregnant so they remained childless. They loved each other a great deal and tended to spend their time together rather than on separate interests.
One day as Red and I sat in the lobby talking as we did often, he spoke with uncharacteristic soft emotion about Margaret's love for quilting and the four unfinished quilt tops in her cedar chest. He wanted very much to put a quilt on her bed there at the nursing home but puzzled about how to finish them. I told him that my mother made quilts and offered to ask her if she'd finish one for Margaret. Red seemed relieved and said that if I'd come by his home, he'd give me all the quilts...the remainder of which he'd happily give my mother in exchange for the one she would quilt for Margaret.
We arranged a time for a visit and Red seemed delighted. I was slightly anxious as home visits were uncommon for me at that time....and I'd be alone. Red welcomed me and wanted to show me around. They had loved to garden which was clearly evident as Red showed me the back yard. Then he wanted to show me the basement where Margaret's crafts were displayed. He proudly showed me item after item, mostly Christmas decorations, asking me to select several for myself.
Then he took me to the quilts....in their bedroom where he uncovered the hope chest. He carefully unwrapped them laying them out with some tenderness on the bed. I was speechless...the tops were clearly old and very beautiful. A tulip pattern, a girl in a bonnet, a fan, another I can't remember. Much of the work was hand stitched. I marveled to Red affirming Margaret's work. He seemed proud and pleased. He choose the top he wanted for Margaret and we packed them up.
My mom backed the quilt and together we tied it. When I returned it to Red and he saw it completed, his eyes filled quickly and he swore as was his habit. He told me later that when he showed Margaret the quilt, she had given him her special look of recognition.

Eventually, I was laid off work at the nursing home and moved on. A few years later, Margaret passed away. I understand Red still occasionally visits the facility bringing chocolates or flowers to the staff. The remainder of the quilts, in my mother's keeping, still packed away unfinished. Until now....when my husband carefully selected one of Margaret's quilts for you and had it finished by a friend at work...and you are now receiving as a gift....this quilt...stitched by the loving hands of a unique, bright woman and championed by her devoted husband. 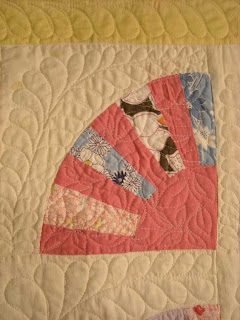 This lovely quilt top was mostly hand pieced, but also some machine piecing on the straight areas. The fabrics appear to be authentic 1930's fabrics, but I don't know when it was made. Since it was hand pieced, and had been stored as a quilt top for some time, it had a few "issues". Some seams had started to come undone, the muslin background had some holes in it. The top had been washed at some point, a big "no-no" which caused many of the threads on the backing to ravel together and made thicker strings. Sadly, some of these showed through the quilt top. However, we did our best. I added a pale yellow border to the quilt top, and then quilted it to death. Each fan has been stitched in the ditch around it, then there are lots and lots of little leaves in each fan. Mostly this was to hold down some of the "hills" in the quilt top. Quilt tops should lay flat before you quilt them, but sometimes, they have a few bumps and rolls that need to be helped to lay flat. Surrounding each fan there are feathers to arch around the fans. Then a feather design in the borders completes the quilt.

Although at the time, I didn't know Margaret's name, but I could feel her smiling down on me as I worked on her quilt. To make the quilt even more special for Ray's son, I took a block that was still mostly intact from his original quilt, and then pieced that to the backing as a label for the new quilt. I am truly blessed to have been able to participate in this wonderful gift.
Posted by Beth on 4/28/2010 No comments: 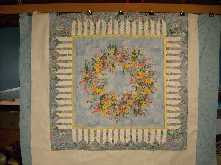 I love UFO's. That's unfinished fabric objects to you non-quilters. This is one that Nancy had for some time, and finally decided to get it done. We quilted it with flowers in the main body of the quilt, and then vines and leaves around the fence. Now she can have a pretty wreath of flowers no matter what time of year. 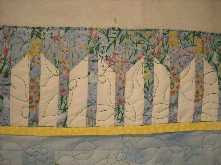 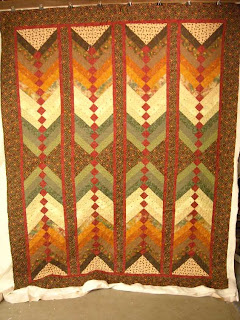 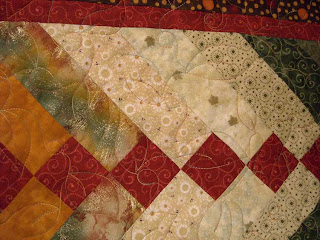 Kris took the French Braid class at Heart to Hand, and this is what she accomplished. The instructor, Lisa, and now Kris both claim that the technique isn't difficult, but I'm still intimidated. I think I'll stick with quilting their beauties for now.
Posted by Beth on 4/28/2010 No comments: 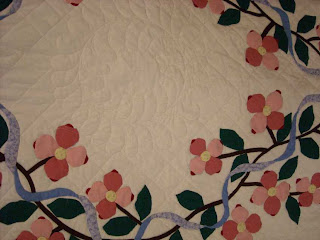 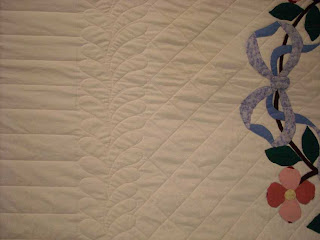 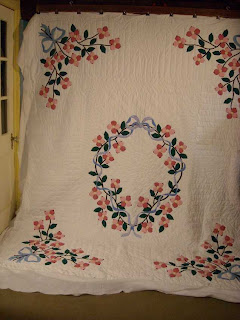 Laverna puts me to shame. She is in her 80's or greater, does amazing garment sewing, and had time to whip this out as well. It's queen sized, all the applique is done by hand. I am honored that she trusted me with this to quilt for her. Lots of ruler work, lots of cross-hatching, and oodles of feathers. Someday, I want to be like Laverna.
Posted by Beth on 4/28/2010 No comments: