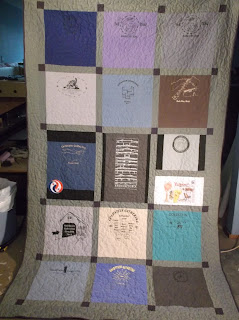 What a great idea!  Each year, the family gets together in one of several states and plays.  Grandma has t-shirts made for everyone to wear each year.  Then Nancy brought them to me and they were turned into a quilt for Grandma. 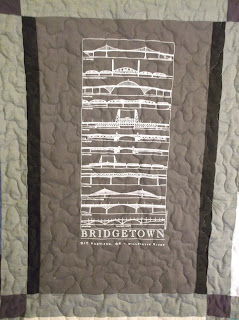 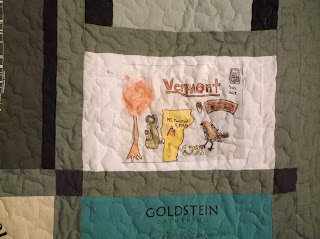 I love this block made by Nancy's son when he was much younger.

Since Nancy and her family live in Portland, she got a Portland bridges shirt and we included that in the quilt.
Posted by Beth on 6/23/2016 No comments: 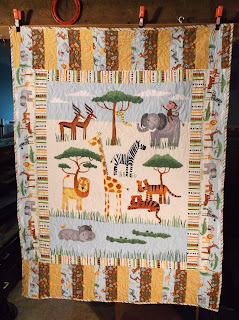 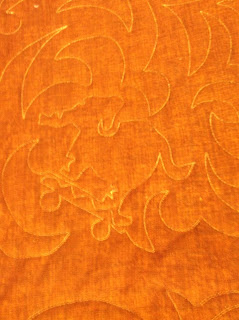 Kelli is a new Auntie!  The baby was born early, but both he and mom are doing great.  Great quilt for a baby.  Take a fun panel, add borders, and wrap them up and cuddle them.  The orange photo shows the African Pull toys panto that we used for quilting.
By the way, this is Kelli's first quilt.  Welcome to the world of quilting! 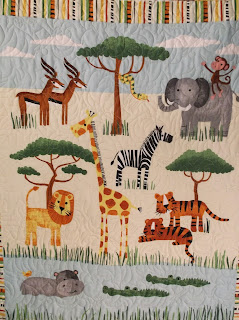 Amazing applique, and the tennis ball with the shadow is amazing. 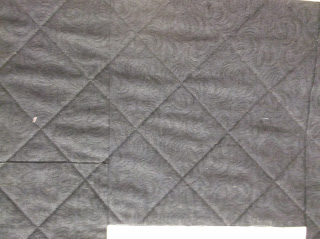 Cross hatching in the background. 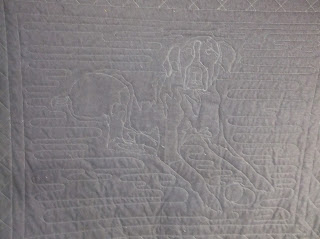 A shot of the back of the quilt to show the quilting. 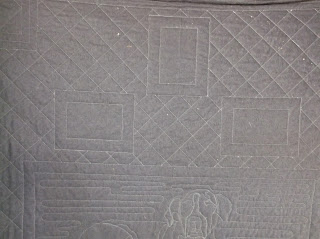 The rectangles are photos of Allie either alone or with her mom.  For privacy, I didn't include those.

String pieced Trip Around the World 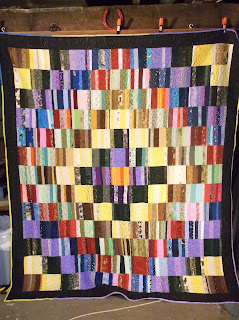 This one has a long story, so be prepared.

First off, it's yet another of my funky string pieced quilts.  Start with all those little leftover bits of fabric that are at least 1" wide and 7 inches long.  (Since the squares finish at 6")  Sew lots or a few together until you've got a piece big enough, then trim to size.

This time, I tried to make an actual pattern, so drew out the design on graph paper and started to count blocks.  I needed 20 of each color scheme, except for the orange in the center, and that's mostly because I had one orange block left over from another string quilt.  Once I think that I've got all the blocks needed, start sewing them into rows.  Only to find that I can't count, and I'm short on several colors.  Piece more blocks and try again until I've finally got enough to make the top.  Look at it repeatedly and try to decide if it works, of if it's just a jumble of messy fabric.

Since I alternate months on who the quilt is donated in honor of, this one was supposed to be for my dad.  But, he kept telling me in my mind, that "No, this one is for Tom."  I'm thinking, What?  It's too ugly for you dad?  Then I learned the reason it's for Tom.

Customer Michael emails me to say that his house has been broken into, they stole an ipod, but that seems to be all.  The reason he is telling me this though is to inform me that he gave my info to the police officer who responded to his call after she was commenting on all the quilts in his home.  I asked Michael for the officer's info in the hope that I could give a quilt to her in the future.  I sent her an email explaining my reason for the quilt, and that this was to be given in Tom's honor.  She writes back to inform me that not only did she know Tom, but that they were hired on the same day, and went through basic training together, and became good friends over the course of their careers.  Wow.  So, this is why dad wanted this quilt to go for Tom.

Like Tom, the quilt is a little funky, but I think it all works out in the end.  If nothing else, it's a fun memory for me of a great guy, and it will hopefully provide some comfort to someone in the future.
Posted by Beth on 6/07/2016 No comments: 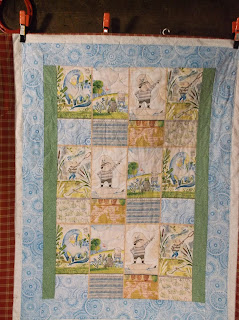 Sweet baby that's going to get this fun quilt.  Start with fun fabric, add borders and quilt with waves.  Bet the parents to be can't hardly wait to cuddle that new baby with this. 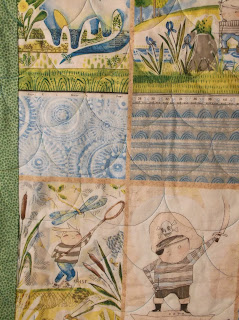 Blue and White panel by Avis 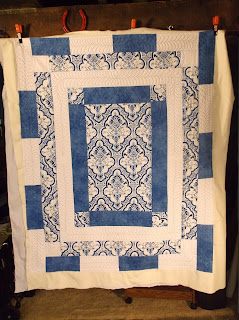 Gotta love blue and white quilts.  Avis took a pretty piece of fabric that she loves, and then added borders. 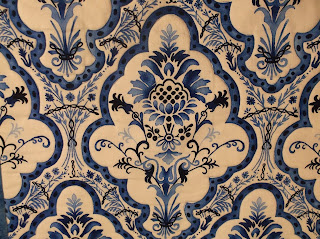 I quilted around the blue scallps on both inside and out, so about 1/4" apart. 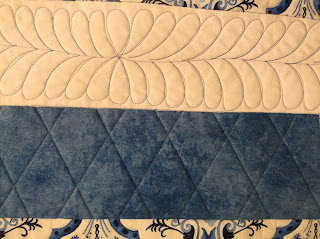 Then feathers in the borders and 60 degree crosshatching in the blue.  So pretty!
Posted by Beth on 6/04/2016 No comments:

Quilts for Camp Erin by Michael and his friend Jeanette 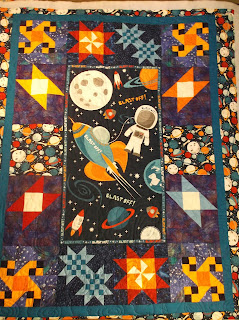 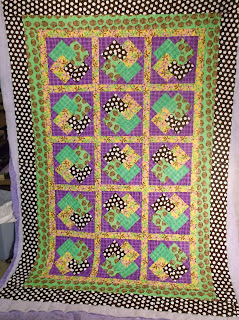 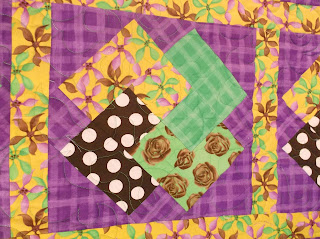 Michael's friend, Jeannette made this one.  The block is called Card Trick. Can't you just see a hand of cards there?  Michael told me to "choose my favorite panto" to quilt this one, so I used Tangles. 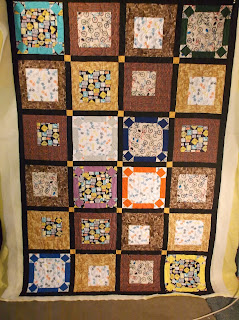 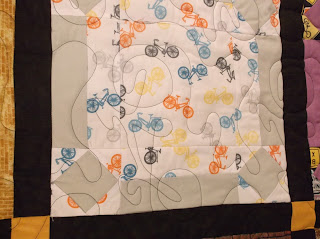 It's BIKES!  I have many of these bike fabrics already in my stash, so I have to admire Michael's wonderful taste in fabric.  Quilted with the American Flyer panto, but I call it the bike panto. 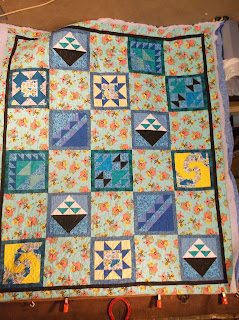 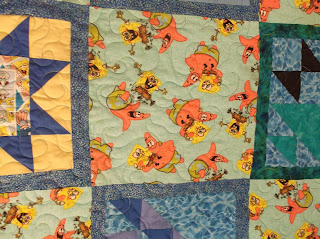 Sponge Bob Square Pants!  (Sorry, I don't know the name of his starfish friend.)  Michael, you are so creative and sharing in your talents.  Lucky kids at Camp Erin.
Here's a link to Camp Erin so you can see more about the great work they do there.  http://oregon.providence.org/our-services/c/camp-erin/
Posted by Beth on 6/04/2016 No comments: