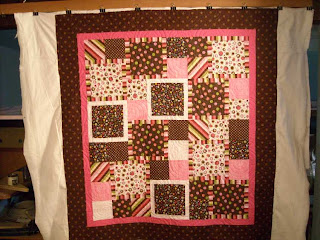 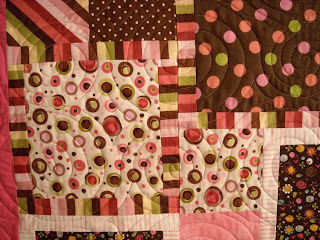 The baby was born in January, 2010, but the quilt is not quite ready for her at this time. Isn't it sweet? Pinks and browns and lots of great dots and circles. And Joan's signature color, lime green. Quilted with Rainbows thread in pinks and browns too. The thread was a perfect choice for it. What a lucky little girl, and I think well worth the wait.
Posted by Beth on 9/15/2010 No comments:

Day At the Beach 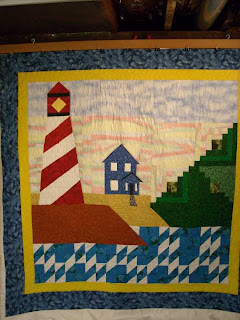 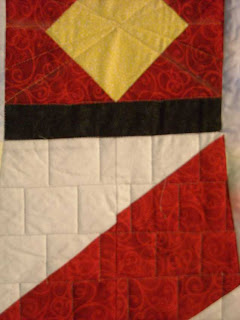 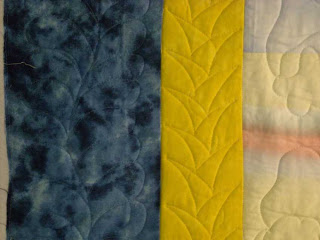 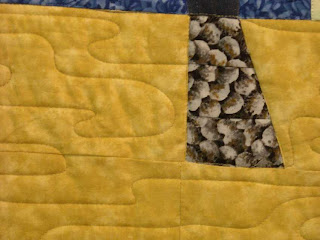 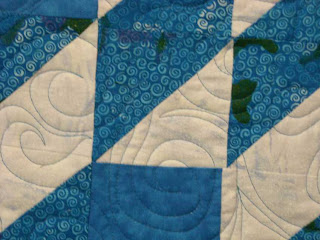 This is a pattern that my dear friend Wendy designed. Someday, I'd like to make it myself, but losing her is still to fresh, and it hurts too much. Quilting Linda's was fun because I got to remember the good times with both of these ladies when we worked on this quilt at the shop. Wendy loved the beach, and had a condo in Seaside. Although the lighthouse she designed looks a little different than the ones that usually dot the Oregon coast, I think it's great in this quilt. I got to make bricks in the lighthouse, sand on the shore line and waves in the water. Since I can't seem to quilt anything without putting feathers on it, the outer border has feathers, and then bamboo in the yellow inner border. Thanks for trusting me with the treasure Linda.
Posted by Beth on 9/15/2010 No comments: 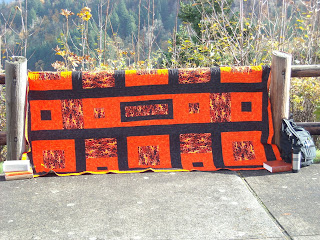 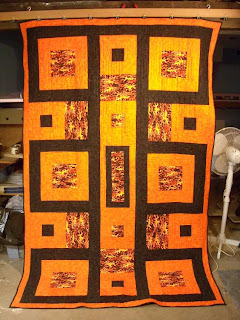 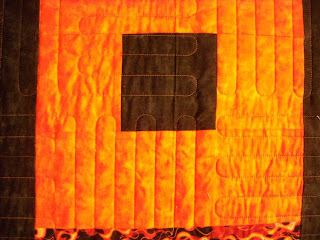 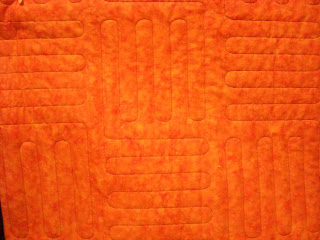 Here's another from the College Life series. My computer is showing this as being in some funky colors, but it's actually done in orange and black. Another OregonUniversity, this time in Corvallis. On this quilt, I used a design called "Fold", and I really love how it turned out. The top is quilted with a pumpkin orange colored thread, and the bobbin had black. It's great!
Posted by Beth on 9/15/2010 No comments: 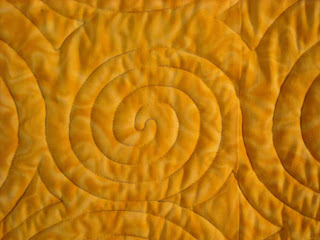 This one is actually a prototype for the final version of Marching Band. It went to a niece (I believe) who is attending a college in Montana, but I've forgotten which one. 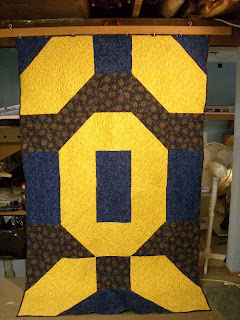 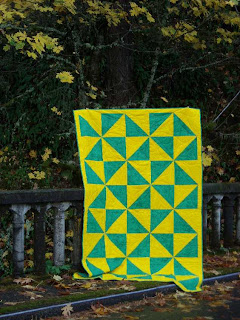 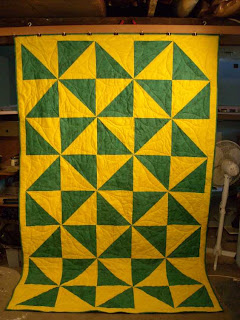 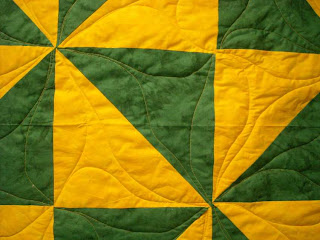 My friends Lisa and Rachel have started their own business, Needle and Thread Memories. At the moment, they are designing and piecing quilt samples in college colors for their "College Life " series. This is Pep Rally, done in the colors of a University located in Eugene, OR. It will have pom-poms on the quilt, but this is how it left my studio. The quilts are all extra long twin sized, perfect for college dorms. As of this writing, they do not have a website of their own, but if you are interested in their quilts, patterns or kits, drop me a line, and I can get you in touch with them.
Posted by Beth on 9/15/2010 No comments: 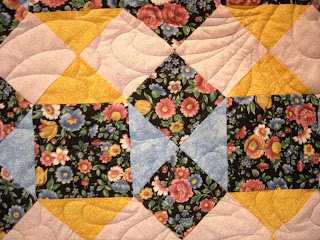 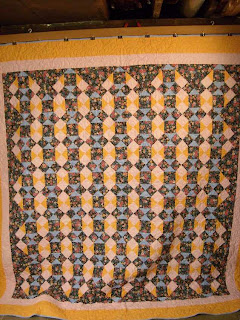 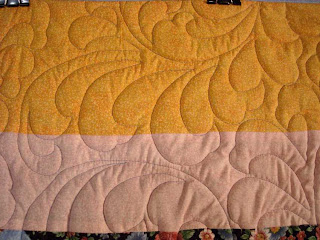 I seem to be having a festival of finishing projects of late. Projects of my own, as well as those from other people. This is a quilt top that a friend of Jennifer's gave to her. By the way, the woman who made the top is also a longarm quilter. I'm not the only one with unfinished quilt tops!
Jennifer's friend gave her several bags of fabric which Jennifer was kind enough to bring to the shop to share with the rest of us. When I found this large (about 80" square) quilt top, I volunteered to quilt it for charity. Then it too sat in my bin for many moons, but I finally got it out. I'd recently ordered the panto "Royal Plumes" and thought about how pretty that would be on this quilt. I cut off more of the batting that Jennie had kindly given me, and loaded up the quilt. I had planned to give it to my usual charity of the Portland Police, but something said that there was a woman somewhere who needed this. It's just so feminine in pinks and peach colors.
The quilt was still in process on my girl when another customer, Molli, came to drop off a quilt. We got to talking, and she said that she worked for the Bradley-Engle house. Hope I spelled the correctly. This is a local women's shelter, and a non-profit. As soon as Molli told me where she worked, I knew that this quilt needed to go there. It's been a long time reaching it's final destination, but I know that it's doing some good for someone now.
Posted by Beth on 9/15/2010 No comments:

Charity quilts in blues and white 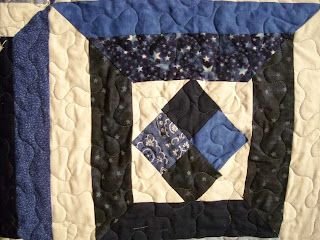 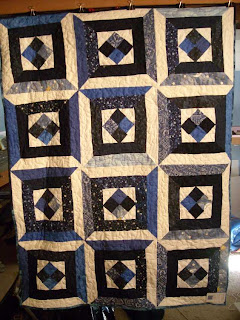 This is actually the first quilt of 3 that I gave to the Portland Police Sunshine Division. The original plan was that it would be a queen sized quilt top, but I was so frustrated with my blocks not turning out nicely that I ended up making 3 smaller quilts. The poor tops have languished in my bin since about January 2009. It was a Superbowl Mystery quilt class during which I made the blocks. They are quilted with the free polyester batting from Jennie (thanks Jennie) and a blue thread. I'm sure that somewhere, someone is enjoying them.
Posted by Beth on 9/15/2010 No comments: 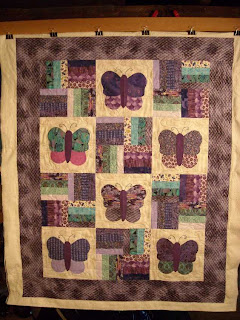 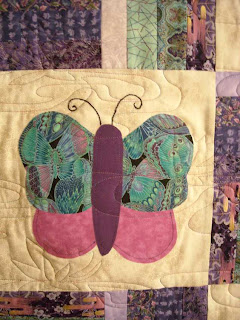 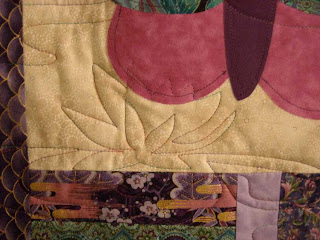 Sharyle is such a precise piecer, I'm in envy of her. This is a baby quilt that will be traveling to Japan with it's owner to be born. Sharyle used a lot of Asian fabrics, and then I quilted it with a design called "Sashiko" which is a traditional Japanese type of stitching. Doesn't look anything like this, but that's what the design is called. We chose a Rainbows thread that picked up all the colors in the quilt top. Great job Sharyle.
Posted by Beth on 9/15/2010 No comments: