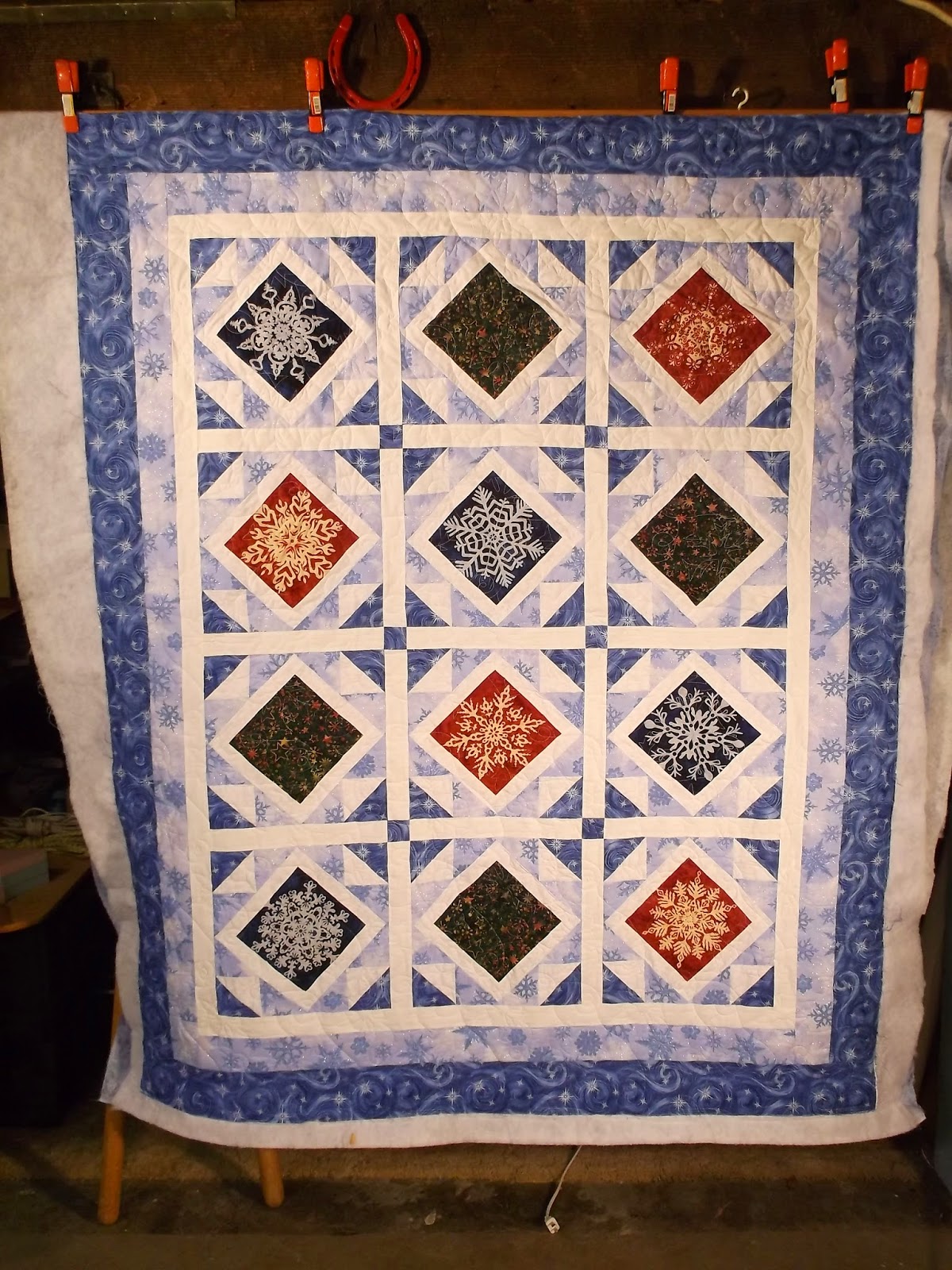 I am still wondering where Michael finds the time to sleep and eat.  Maybe he doesn't.  Anyway, here's his most recent project.  Fussy cut snowflake designs in the center of the blocks, and a lovely glittery snowflake patterned fabric in the background and borders.  Quilted with "Flurry" panto of snowflakes and white "Glide" thread.  Makes me long for snow and not the current deluge of rain that we are having.  Oh well, you don't have to shovel rain! 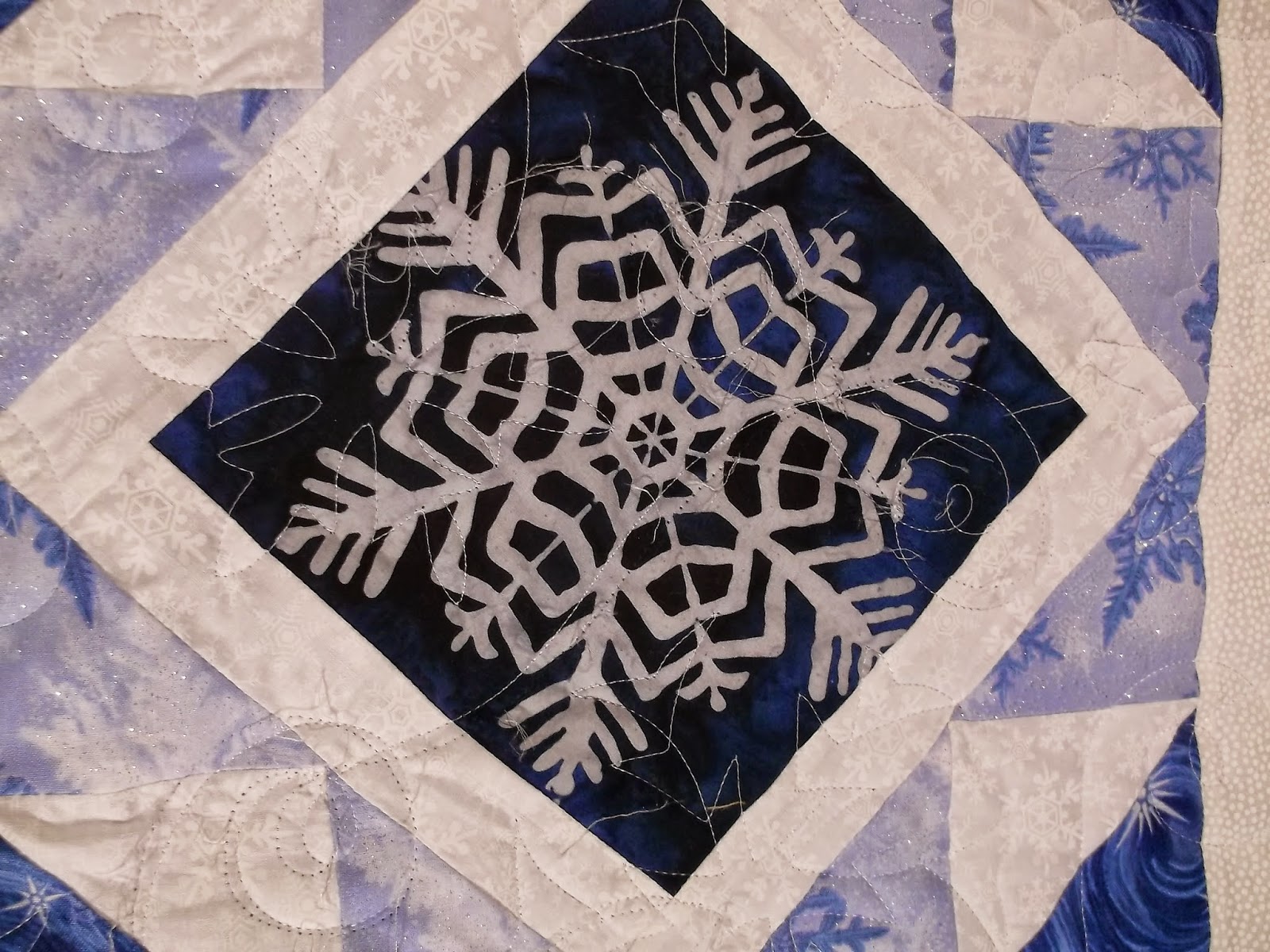 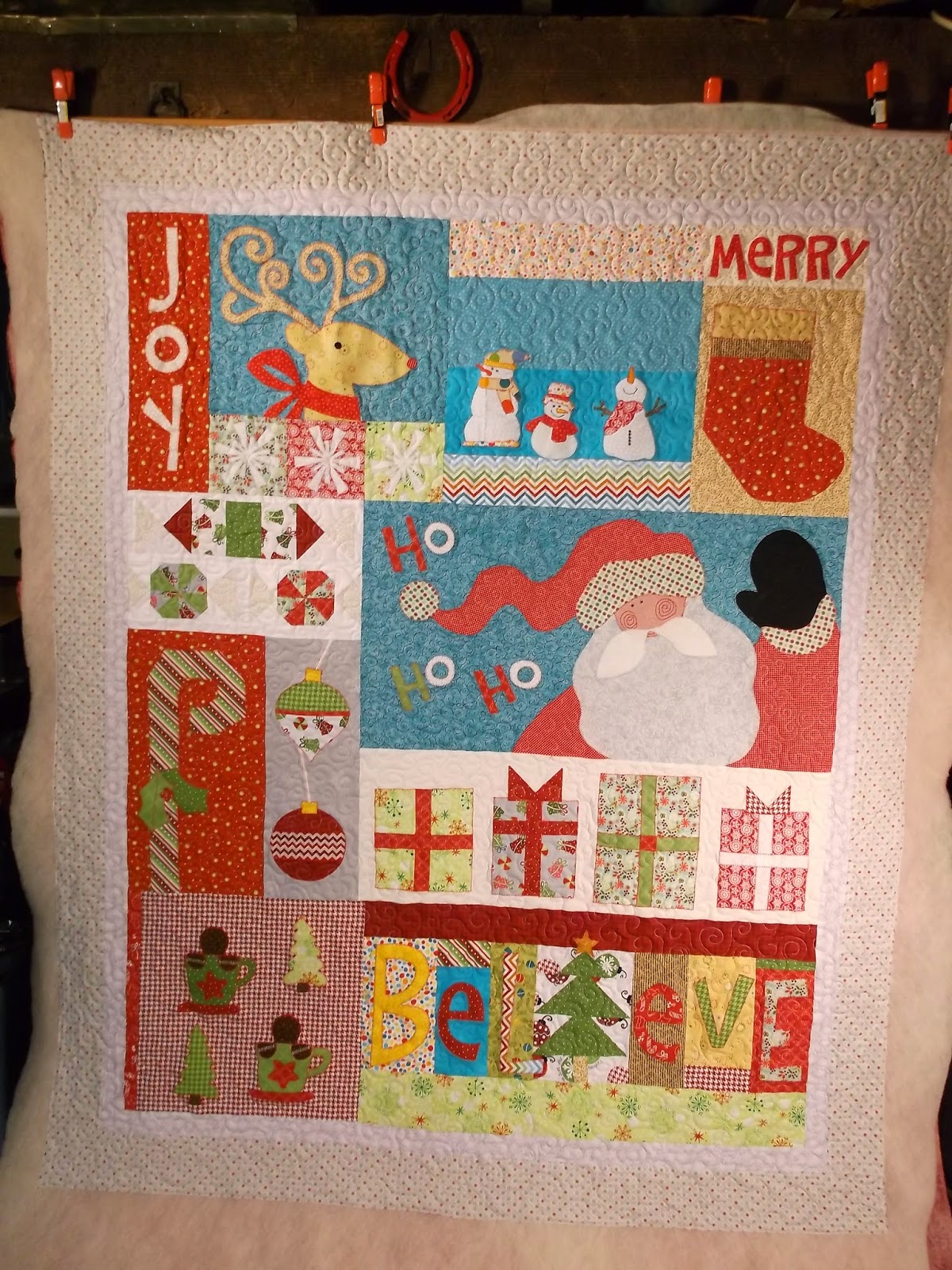 Judee made this quilt for her grandkids, and it's such a great kid quilt.  The pattern is from "Art to Heart", but she has modified it slightly.  Still lots of applique, and pieced blocks.  Judee chose to use wool batting so it's got a great loft, and I quilted it with a pretty tight all over quilting design.  I left some things empty, most of the lettering, and parts of Santa.  This way they've are more dimensional from the rest of the quilt.  There's an unwritten "rule" as well that you don't quilt over applique.  Sometimes though, you have to do some quilting on the applique to keep the batting from shifting as the quilt is used.  That's why Santa has a curly beard, and some more swirls in his coat. A few strategic designs in the candy cane and the ornaments.  Wish I could be there when the kiddos see this one for the first time.
Posted by Beth on 10/28/2014 No comments: 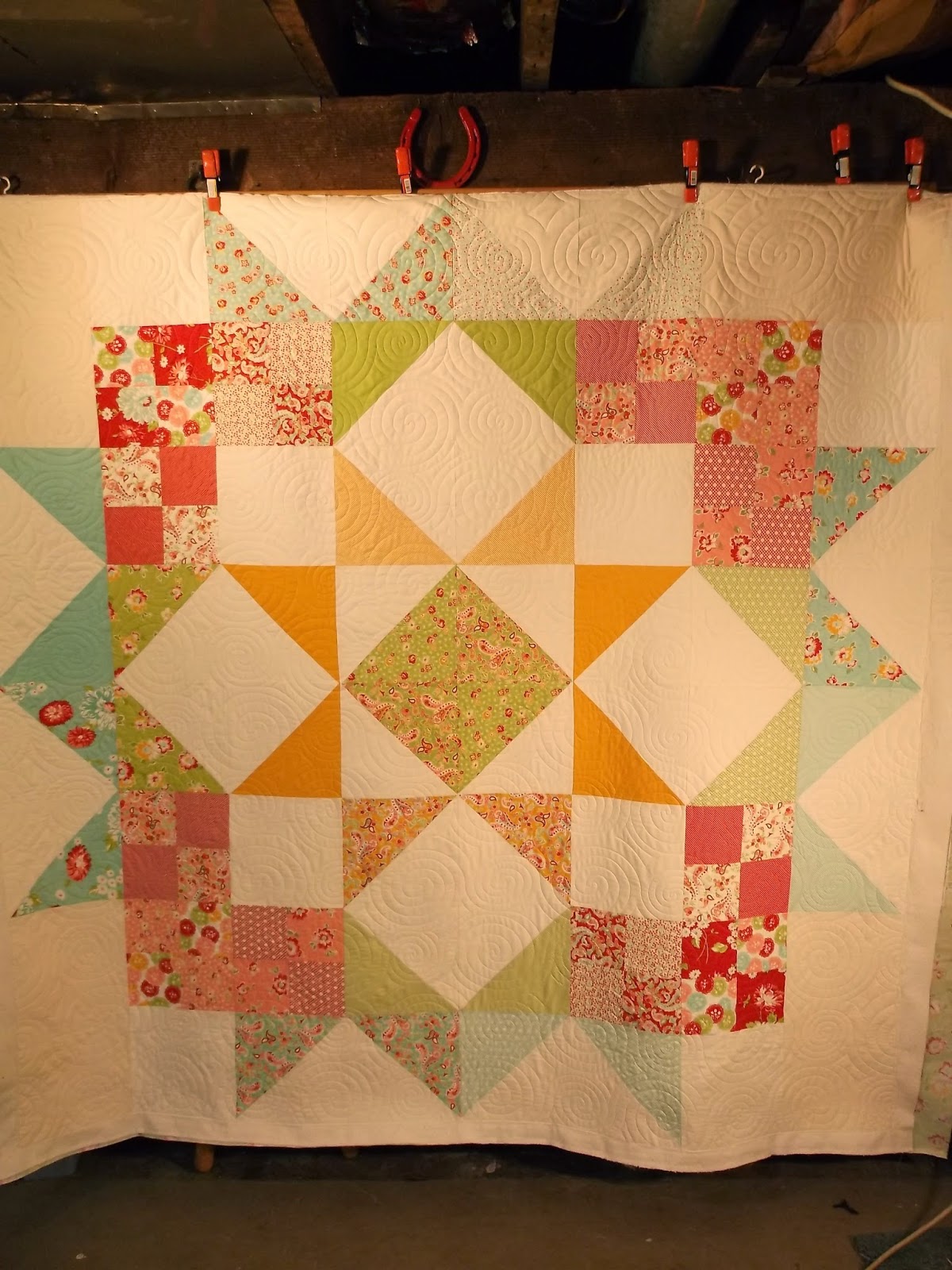 More quilting terms.  A "Layer Cake" is a package of 10" squares of fabric, pre-cut and usually from a fabric line so that they all coordinate.  I believe that Terri said she won these, and how come I didn't get in on that contest?  Kind of a 1930's theme, but updated at the same time.  It's amazing to me what you can do with a 1/2 square triangle.  Take a square of fabric, cut it in 1/2 on the diagonal to make a triangle.  Sew it with another triangle to make a square again, but with two different fabrics.  Lay them out in various patterns until you are pleased with the results.  Terri also used 4-patch units in the corners of the square.  Quilted with the Swirls board and So Fine! thread.
Posted by Beth on 10/28/2014 No comments: 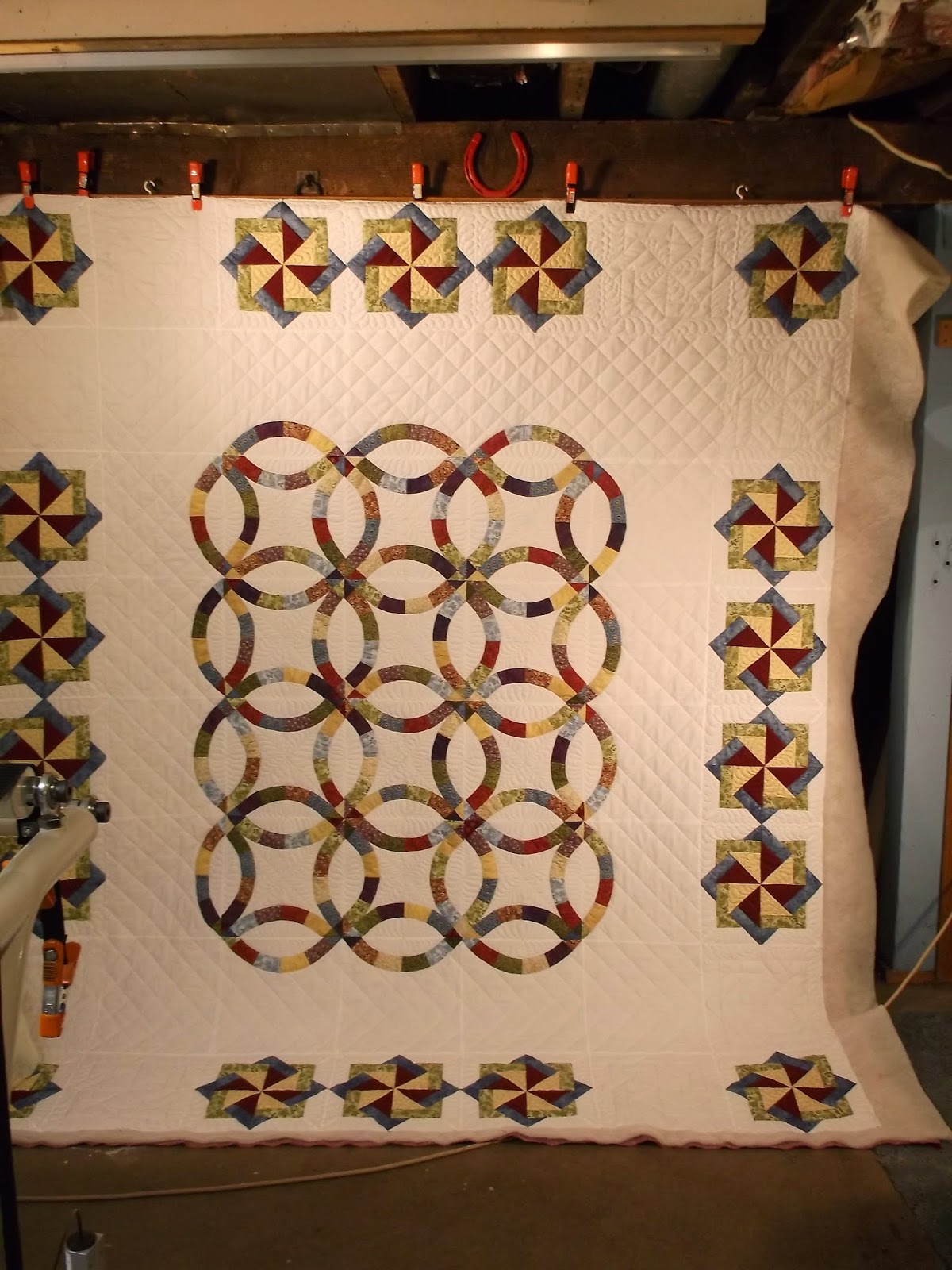 Oh my!  I dream of "someday" piecing a DWR (double wedding ring) quilt, but I haven't yet.  I so admire people who take on these amazing challenges.  Pat told me that this quilt is for "a non-traditional couple, but they want a traditional quilt."  We chose traditional quilting designs for this pattern with lots of feathers and stitching in the ditch.  I love that this quilt is even included in the pre-nup agreement.  If the relationship ends in under 5 years, the quilt reverts to Pat.  Great idea!  After all the work that she put into this, I can't believe that she's giving it away.
Each block has been SID around all the seams, then I added feather quilting in just the cream triangle shapes.  This allows the rest of the parts of the block to pop up.  The quilt will live in Wisconsin, so a chilly climate.  Pat chose wool batting, and the higher loft of the batt really allows the quilting to show.
When Pat and I met for her to drop off her quilt, we talked about quilting designs so that she would know what her quilt was going to look like when I was finished.  I found myself quilting along, sticking to the described plan, but then thinking "It needs something else here."  So I'd add a little bit.  "Oh!  I like that."  Quilt some more in a different section and realize that it needed more quilting in that area too.  I must admit, that I had one vision, and started to quilt it that way, but it was quickly removed.  It just didn't work.  I'm very pleased with how this turned out, and I surely hope that Pat loves it too. 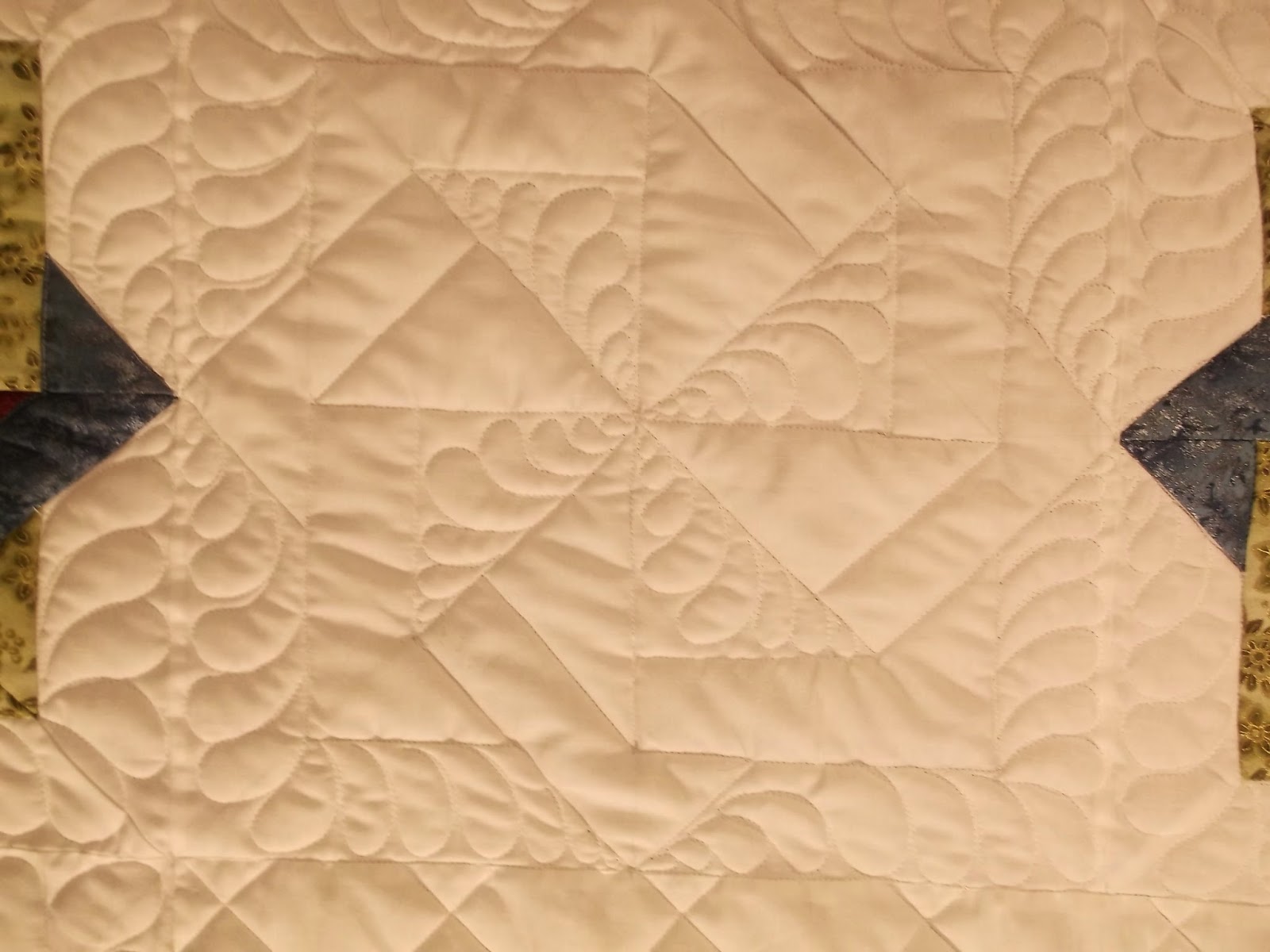 I call this block, above, a "ghost block"  Pat left several open spaces on the border of the quilt that are the same size as the pieced blocks.  I quilted these the same as the pieced blocks, but they only show the texture of the quilting since there is no piecing.  Way fun!  Except for marking where the quilting would go.  I don't like to mark quilts because then I have to get those marks out.  Sometimes though, you just have to bite the bullet and mark up someone else's handwork.  Gives me the shivers. 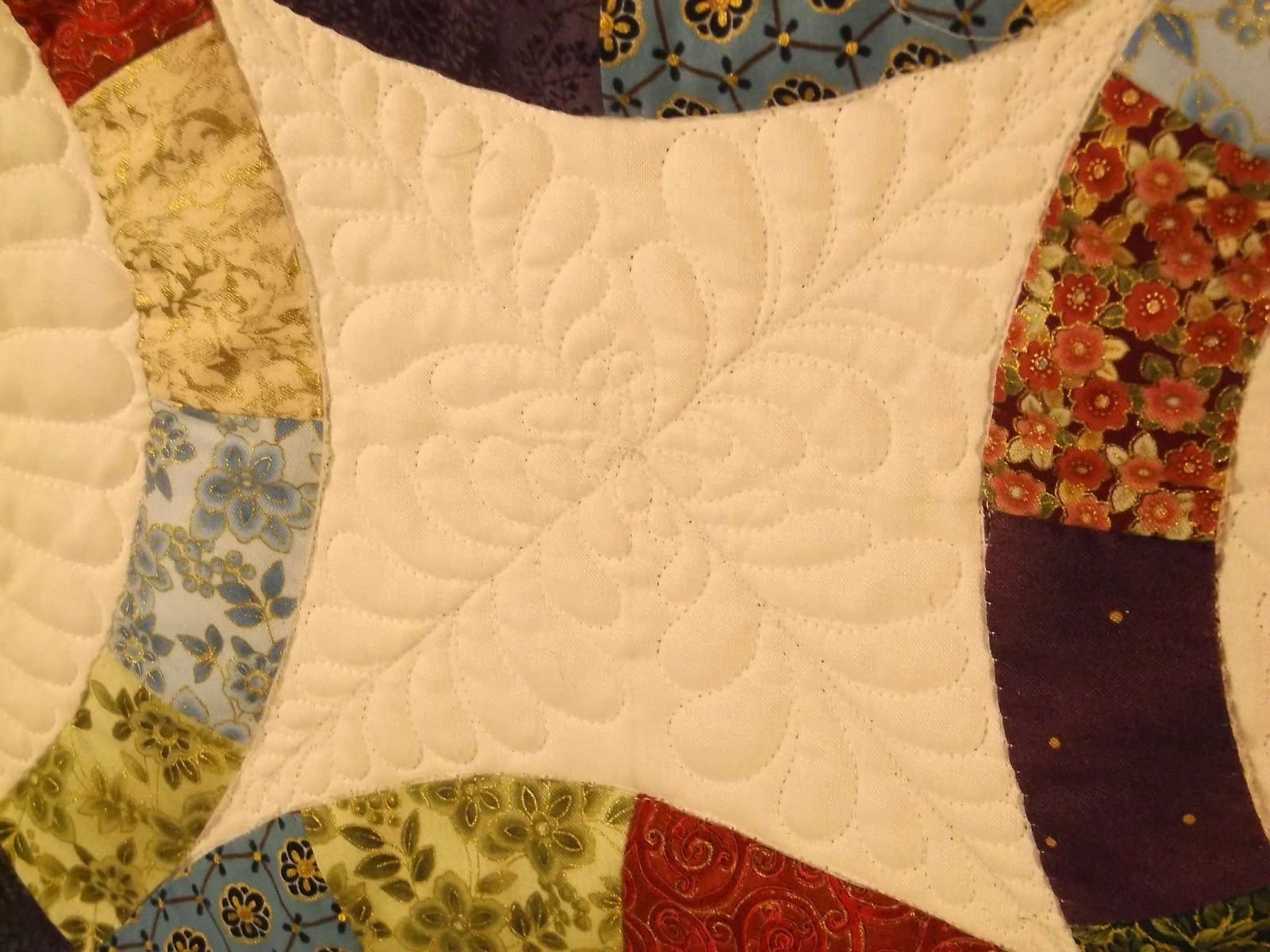 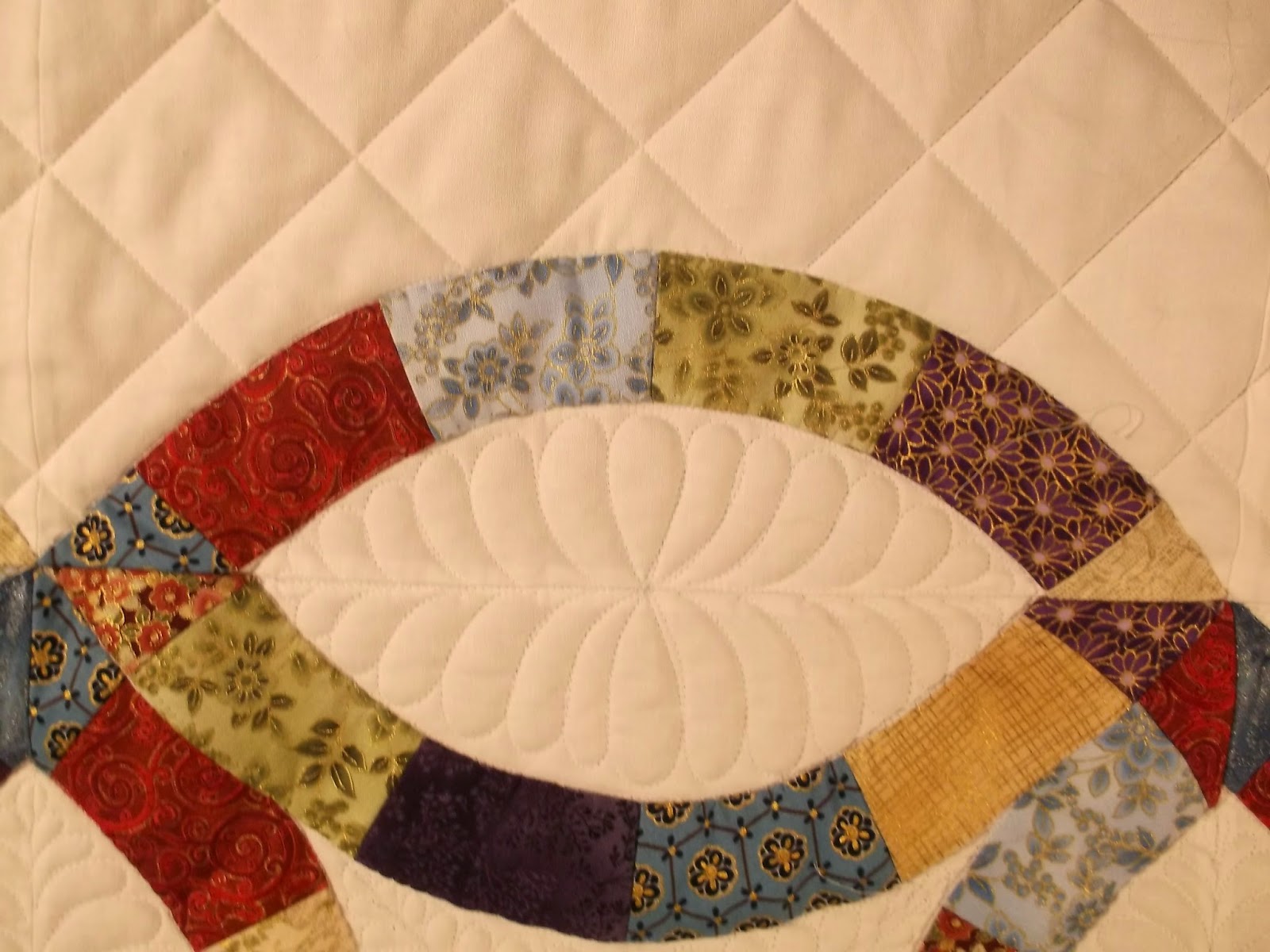 These two blocks above show the traditional quilting design for this pattern.  They are frequently quilted with feathers in the center squares and the "football" shapes.  I also cross hatched the background to emphasize the angular designs in the pieced blocks.
Here's the back of the quilt.  The fabric is actually a pretty deep burgundy, but the camera read it as red and then orange.  I was trying to show the lovely quilting though. 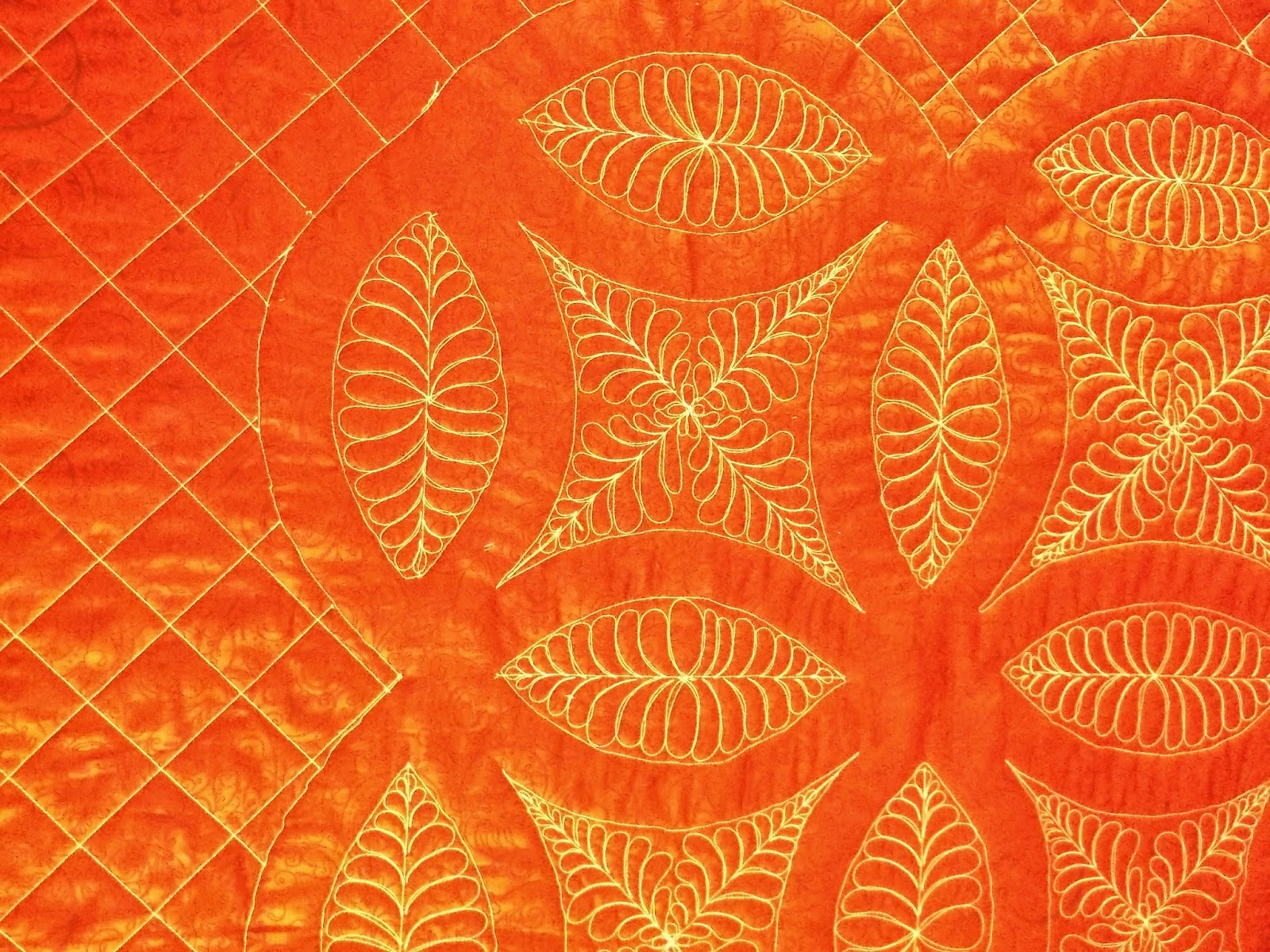 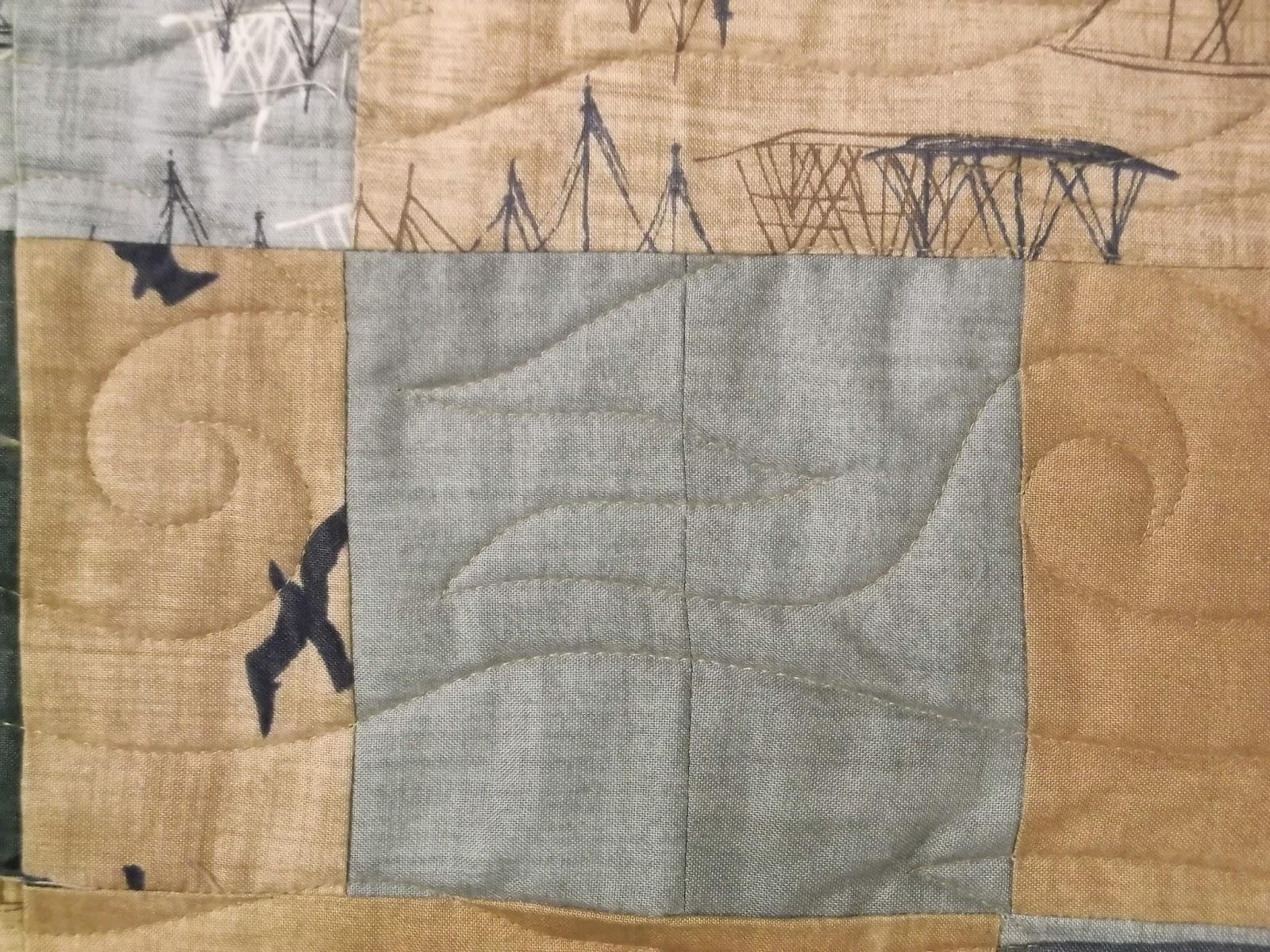 In fabric terms, a "Jelly Roll" is a collection of fabrics, all cut at 2.5" wide by 45" long.  Then they are all rolled up and tied with a pretty boy and resemble a jelly roll from a bakery before they are taken apart.  So fun to look at in my closet.  I have at least 2 of them right now, but if I use them, I won't have them to pet and look at anymore!  I wonder how many years before I do something with them?
Posted by Beth on 10/21/2014 No comments:

Modern leftovers by me

Baby quilt for Auden by Nathan 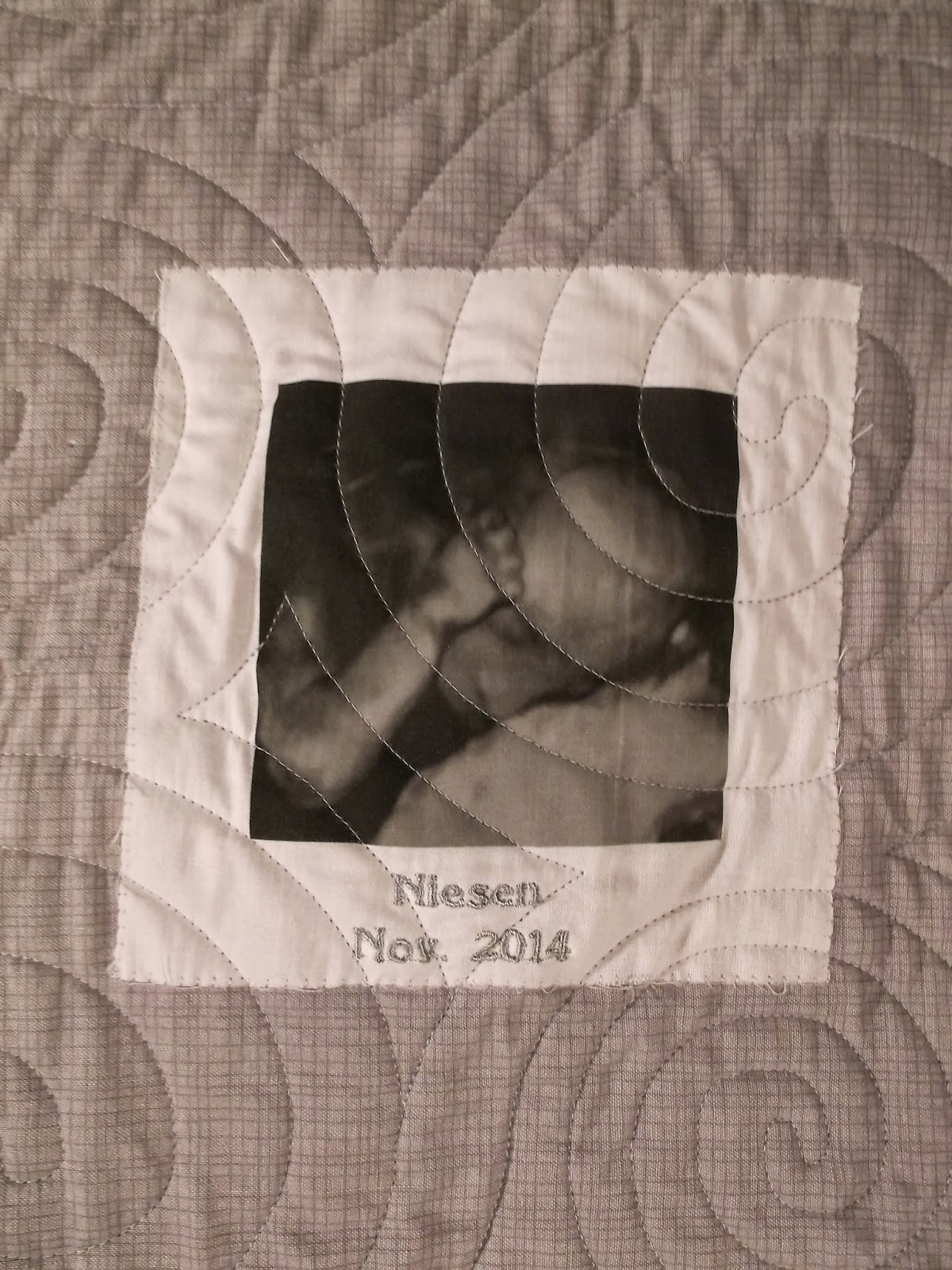