"Cycle Girl" by me

I won't be able to give her the quilt until tomorrow, so no spilling the beans!  Inge is a friend who is expecting her first baby soon.  She and her husband Scott are both cyclists, so of course the baby's quilt need to have a bike theme! 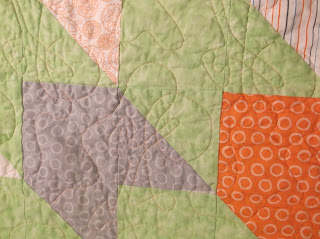 Then the quilt is finished with the "biking" pantograph that I've used for many other quilts.  Just perfect for them, and soon to be 3!
Posted by Beth on 8/25/2016 No comments: 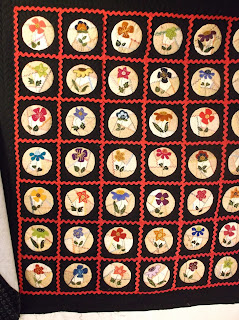 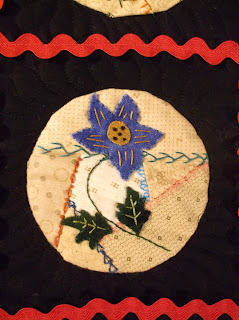 Here she has done it again.  First off there's the crazy pieced background circles.  Then all of those seams are covered up by decorative stitching.  Add wool applique pieces to that and embroider to embellish them. Hand applique the circle to the background fabric.  Finally, sew all the blocks together and outline them with red rick rack.  Fun!

I can't see the stitching on this one, but I know that I used the center circle as a spine for the feathered "wreath" that I quilted into it.  No quilting over the rick rack, and then feathers in the border.

Leigh told me that she had taken first prize for applique in the last quilt show that she entered and won a new sewing machine as a prize.  I hope that she'll put some more of her work into shows!
Posted by Beth on 8/25/2016 No comments:

Wool applique in cream and black by Leigh 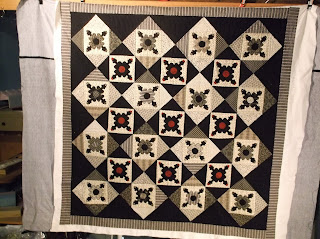 How does she do this?  Leigh told me today when she picked this quilt up that it took her "about a month" to make it.  She does not watch television, but likes to spend time with her husband who does, so she always has her hand work.  Just amazing!
Here's what we did.  First, I listened to my brain when it told me to change what we had initially discussed for quilting her quilt.  Then I contacted her, and she told me to listen to my brain, and do what it was saying. 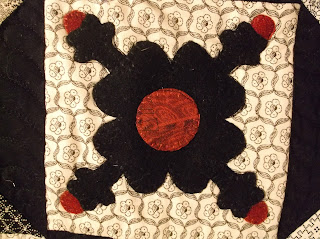 First, SID around all the applique pieces.
Then add feathers in the black setting triangles of the applique blocks. 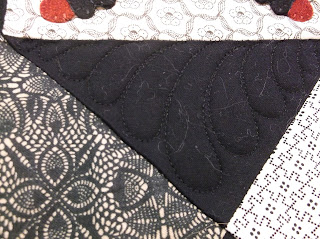 It's really hard to see since the thread matches so well, but there are 2 little echoed triangles in each triangle off the alternating applique blocks.  That would be 128 little triangles in case you're counting.  No wonder I didn't finish those in the first afternoon that I was working on them.  (I have such great plans for all the things that I will accomplish) 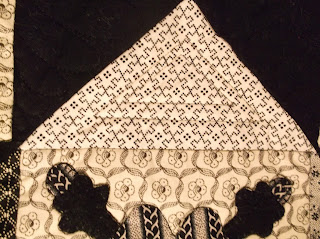 Heart in black and white by Pat 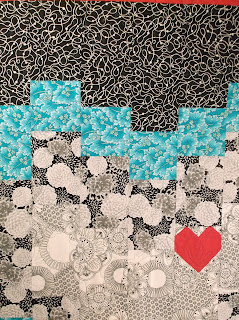 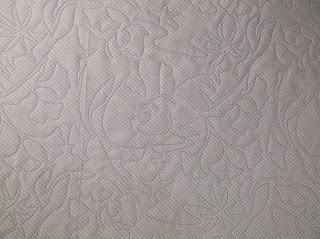 Since the prints are so busy, you can't see the quilting, even though Pat chose a thread called "Aquamarine".  Goes great with the teal in the quilt top.  So, why not have it show on the backing?  It's "Sushi" .  One of those pantos that I purchased because it was fun, but never had the right quilt for it.  This quilt was perfect for this panto!
Posted by Beth on 8/15/2016 No comments: 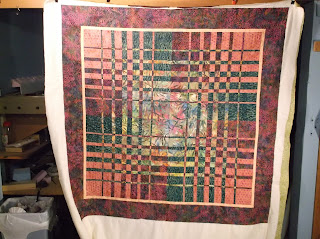 Another lovely convergence quilt by Judy.  I tried to get a shot of the quilting and the thread, but it doesn't show.  Trust me, she made a great choice in quilting design and thread color.  I didn't think that a thread called "Lime Squeeze" would be approp. on a quilt this color, but it really works!
Posted by Beth on 8/15/2016 No comments: 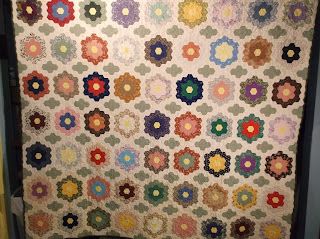 Shamefully, I don't recall who gave them this quilt top, but it's all hand pieced.  I do love English Paper Piecing.  Quilted with an edge to edge design of leaves and vines in a pale cream thread.  Just enough to blend into the background. 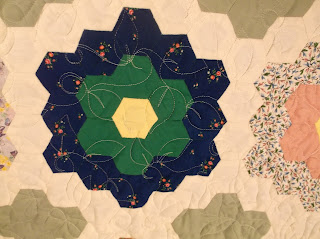 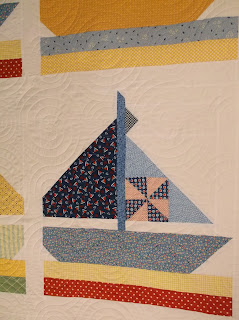 The boats are all pieced, and each one has a quilt block in the sail.  The quilts in the sail are about 4" finished, so quite small.  Quilted with the swirls board and white thread.
Posted by Beth on 8/15/2016 No comments:

Whole cloth by me 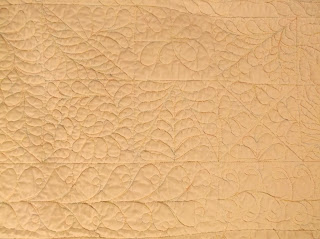 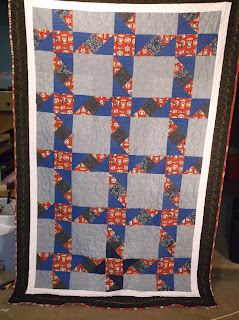 This quilt is a long time in the making.  In Sept. of 2015, while on Cycle Oregon, Xande and I stopped at Jo's quilt shop.  In a town in Eastern Oregon that I'm sorry to say I've forgotten the name of!  Great little shop, and then there's the barn in the back.  We went a little crazy there.  I bought the remainder of the red police badges fabrics, at Xande's urging. "With all the police quilts you make, you really need that." where her words.  Started piecing the blocks soon after the terrible shootings in Dallas, TX, and used the block "Star of Hope".  Seemed more than a little appropriate. 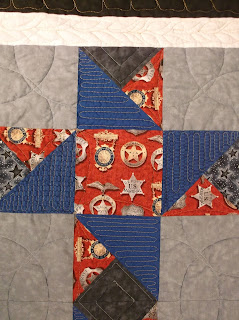 The problem is that the black or grey triangles are supposed to have been the same fabric as the light grey background, so that they blue stars in the blocks becomes lost.  Argh.  That's why I quilted such a bold design in the blue, to attempt to make them stand out a bit. Not sure it was effective, but I did try. Then attempted to tone down the "wrong" fabric, with a simple square design. 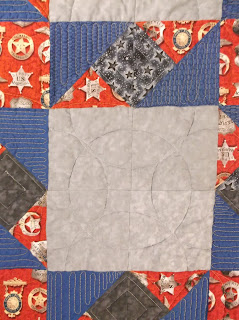 Played a bit with my rulers in the setting squares, but not thrilled.  At least I changed to a pale grey thread to have it blend a bit more. 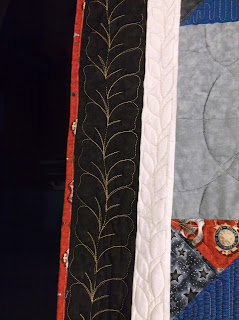 Used "Military Gold" thread in the main body of the quilt and the borders.  While the police aren't necessarily "military", it seemed appropriate.
Posted by Beth on 8/15/2016 No comments: 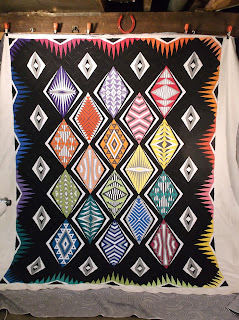 This quilt is all Micahel's work and boy am I impressed!  All paper pieced, something that I'm unwilling to take on, and especially in this quantity.  There are 18 blocks, each made up of 4 quadrants.  That's 72 quadrants total.  No thank you.  That doesn't even include the border by the way. 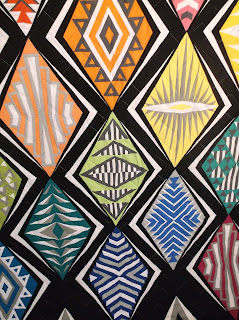 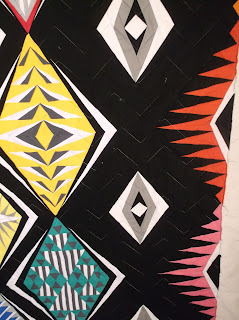 All those little pieces, and all that paper to tear away.  Wow.  Quilted with the Zig Zag board and Rainbows thread "Zebra".  Just enough to hold it together, but not to detract from the amazing piecing. 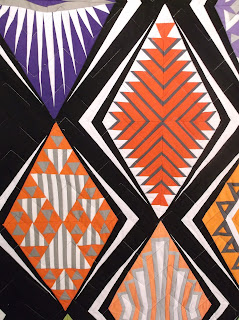 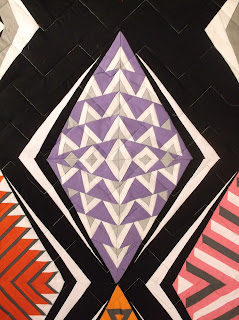 This block is my favorite.


Technically, I gues that Michael did make this quilt, but he did rescue it.

This is an old quilt top, I don't know what era,  but I'm glad he bought it to save it.  It arrived to him tied with yarn, and in need of some love.  Michael took it all apart, and started to tie it again, but then brought it to me.  You can see in the photo below that the quilt top is quite faded with the darker spots being where the original yarn ties were placed. 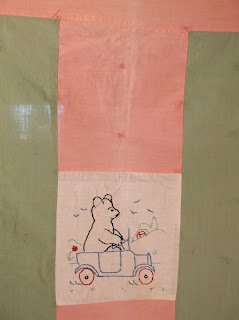 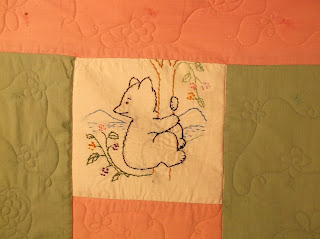 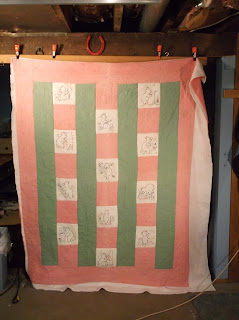 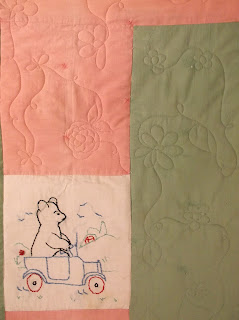 Michael asked for a "Bee" meander in the pink, with a few flowers thrown in.  I opted for bees and flowers in the pink, and just flowers in the green sections.  SID around all the embroidery blocks, but no stitching on those.
Two different colors of thread, to match the fabric, but that's a much better choice in this quilt as well.  One of those were you could feel the person who had pieced and embroidered this quilt sending me their approval as I worked on it.